Today we’re excited to announce the launch of Release, an on-chain contract registry for web3 developers.

By creating a release, your contracts become shareable, verifiable and deployable by anyone. Our registry is permission-less, trust-less, and backed by decentralized storage.

What you get with Release:

And best of all, every release is fully non-custodial and controlled by your wallet!

At thirdweb, we’ve spent the past year building and releasing our best contracts for anyone to deploy. Today, we’re opening up the same release process we’ve been using and making it available for every smart contract developer.

How does it work?

When you release a contract, it is published to our on-chain non-custodial contract registry. This registry maps every contract that you deploy to a version. All contract metadata is stored on IPFS and associated with a version. Release lives on Polygon and can be accessed by anyone, our dashboard provides a gas-less option that’s free to use.

Once your contract is released, a landing page is generated. This makes your contract available for anyone to deploy, we will also allow you to restrict deploys in the future.

When you deploy a contract, we automatically generate dashboards and SDKs which make it easy to manage, analyze and integrate into applications.

Deployed contracts from your releases get attributed back to you, which builds up your on-chain reputation as a contract developer. In the future, we will enable opportunities to generate revenue from your contract releases.

Release is 100% free. We cover all the gas costs associated with releasing your contract.

How do I create a release?

To create a release simply run npx thirdweb release in any smart contract project and follow the link. On the release page, insert important information about your contract and the current version you’re releasing.

Why did we build this?

Today, smart contract development is fragmented and disorganized. Deploying contracts and connecting them to apps involves multiple painful steps. There is no way to keep track of contract versions and updates. There isn't a secure way for teams and developers to share contracts with collaborators.

Release simplifies the smart contract workflow for teams and organizations:

We believe that Release will bring engineering excellence to the industry by providing a standard for publishing and distributing smart contracts.

To see how you can build with thirdweb Release, check out our latest YouTube video: 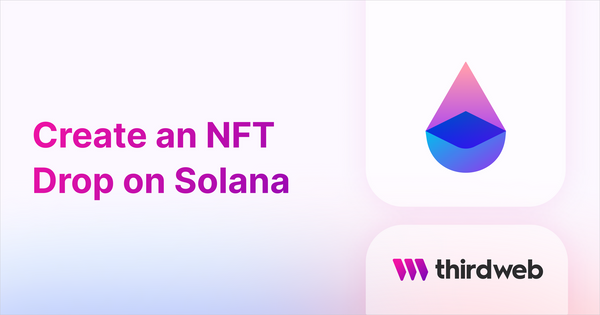 In this guide, we are going to use our Solana SDK to create an NFT Drop that other wallets can mint from! Before we start, here is a list of useful resources and tools we will be using in this guide. * Project source code * Solana SDK * Getting started with Solana 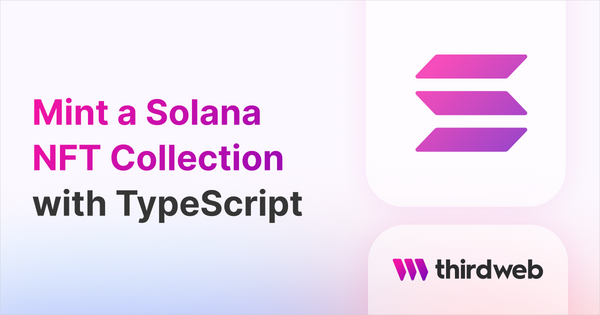 You can deploy an NFT Collection via the dashboard, but if you're curious about how you can do it with TypeScript, then you came to the right place! Directory Setup Create a new directory called my-personal-collection, and within this folder create a file named mint-nft-collection.ts. Installing Typescript SDK Install

The Chicago Bulls tapped into the creativity of Web3 artists to envision new logo options for fans, minted as 1 of 1 NFTs. The organization tasked 23 digital artists to recreate their logo for “The Auroch’s” Collection, auctioned via Coinbase, in September 2022.